Angola. Despite Angola’s growing oil wealth, poverty is widespread, and the economic gaps have widened. About 70% of Angolans are estimated to live on less than $ 2 a day, while President José Eduardo dos Santo’s daughter at the beginning of the year was named Africa’s richest woman.

In March it was reported that over 6 million people in the region are at risk of serious food shortages, more than 1.8 million of them in Angola. Recurring droughts and floods were the cause.

The authoritarian President dos Santos has been sitting in his post since 1979, and both wealth and power accumulate within his family. In June, the president’s son was placed as chairman of the state investment fund, which controls how the oil recovery surplus is used.

According to Countryaah, Angola’s rich oil magnates invest in the money-hungry crisis economy of former colonial power Portugal, and the Portuguese prosecutor investigated suspicions of corruption and money laundering linked to Angola’s elite during the year. It upset President dos Santos, who suggested that growing trade between the countries could be jeopardized. 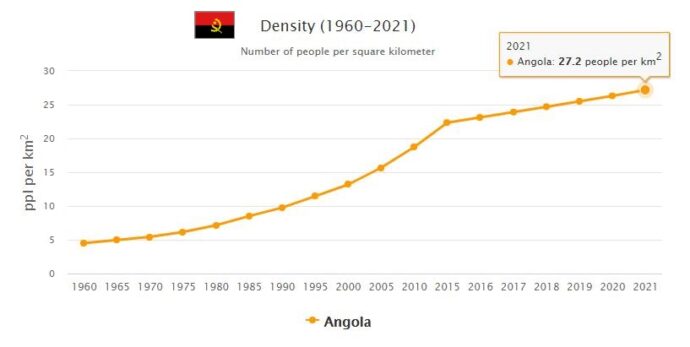 The oil accounts for 95% of Angola’s export income and 45% of GDP. During the year, the government decided to increase the rate of oil exploration, and a project to export liquefied gas was initiated.

GDP growth was estimated to be around 7% during the year. The substandard electricity grid does not support the expansion of industry and consumption, and the government presented plans to invest $ 23 billion in improved electricity grid.

A regime protest in September was met by a large police force and many were arrested. A youth movement had held repeated protests since the Arab Spring of 2011, accusing dos Santos of suppressing human rights and abusing and wasting the country’s oil revenues. A 17-year-old boy was charged with insulting the president with his T-shirt, with a text about dos Santos as “abominable dictator”.

The human rights organization Human Rights Watch urged the government to stop arrests and attacks on protesters and journalists reporting on the protests. The UN Commissioner for Human Rights criticized the regime for evicting people from development land and for sexual abuse committed by security personnel and border guards.