Bosnia and Herzegovina. According to Countryaah, a Sarajevo court in March sentenced Serbian ex-commander Veselin Vlahović to 45 years in prison, the longest sentence for war crimes so far distributed in Bosnia and Herzegovina. Vlahović, known as “the monster from Grbavica”, was felled for eg. over 30 murders of Bosniaks and Croats during the war in the 1990s. 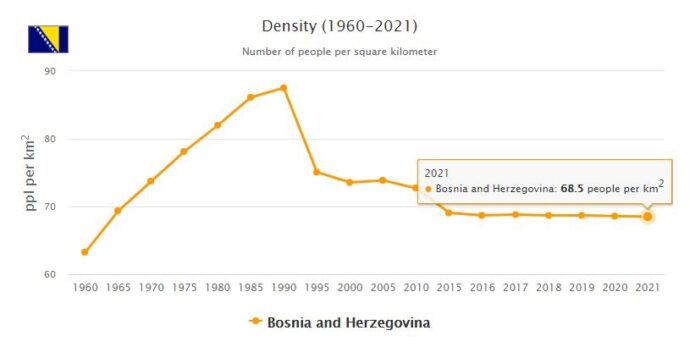 In March, the UN War Criminal Tribunal in The Hague sentenced former Bosnian Serb interior minister Mićo Stanišić and an employee to 22 years in prison for war crimes. In May, Bosnian croat Jadranko Prlić was sentenced to 25 years in prison for ethnic cleansing and other war crimes. Prlić was Prime Minister of the self-proclaimed Croatian Republic of Herceg-Bosna during the war and Foreign Minister of Bosnia and Herzegovina from 1996-2001. Five other Bosnian Croats were sentenced to 10 to 20 years in prison at the same time.

In the country’s most widespread corruption crisis since independence in 1992, the president of the Bosnian-Croat Federation, Živko Budimir, was arrested in April, along with four others, suspected of receiving bribes for arranging pardons on convicted persons. They were detained for a month before the Constitutional Court changed the verdict and they were released on parole. Budimir continued as president of the federation, one of Bosnia and Herzegovina’s two autonomous parts.

Extensive protests took place during the year against politicians not being able to agree on a new social security law. Since the previous law expired in February, it had become impossible to obtain new passports or ID documents for newborns. The reason for the disagreement was that Serbian members wanted the numbers to reflect the country’s division into two parts, something Bosniaks and Croats opposed. Only in November was a new law approved that made it possible to issue new social security numbers.

The first census in independent Bosnia and Herzegovina was carried out for a few weeks in the autumn. The census, which included a non-compulsory issue of ethnicity, was a requirement of the EU for talks on a future membership.

In October, the EU decided to withhold € 47 million in aid when politicians, despite riots and a judgment of the European Court of Justice, failed to agree on a change in electoral laws to eliminate discrimination against minority groups. The Constitution’s writings on three “constituent people groups” – Bosniaks, Serbs and Croats – meant that other ethnic groups were excluded from political office.

In the fall, the excavation of the perhaps largest mass grave found since the 1990s began, in the village of Tomasica in the northwest. Remnants of around 1,000 Bosniaks and Croats were believed to be in the grave.

Cinema. – The history of Bosnian cinema – with the first screening in Sarajevo on 27 July 1897, the first long film (Major spook by Nikola Popović) in 1951 and names such as Bato Čengić, Hajrudin Krvavac (Valter songs Sarajevo returned in great vogue during the siege) up to Emir Kusturica – is made up of less than one hundred and fifty feature films with a significant increase in recent years. A cinema that has started almost from scratch, powered by many newcomers, formed during the war of 1992-95. The leader of the new course, while Kusturica chose to live and work in Serbia, was Ademir Kenović with the poetic neorealism of Savrseni krug (1997, The perfect circle), screenplay by Abdulah Sidran and Pjer Žalica, the first film made after the war, on the set of which several filmmakers found themselves.

The turning point came in 2001, with Danis Tanović ‘s No man’s land, Palma for best screenplay at Cannes and above all Oscar for best foreign film in 2002. Tanović established himself as the most important Bosnian director of the century with the ambitious L ‘enfèr (2005), the melancholic comedy Cirkus Columbia (2010) and the tough Epizoda u životu berača željeza (2013, An Episode in the Life of an Iron Gatherer), winner of two Bears at the 2013 Berlin Film Festival. directed in 2003 with Gori Vatra (Welcome Mr. President), Silver Leopard at the Locarno Film Festival, followed by Kod amidže Idriza (2004, A casa di zio Idriz) and the documentary Orkestar (2011, Orchestra) about the historic pop group Plavi Orkestar. Another important prize for Bosnian cinema was the Berlin Golden Bear for Jasmila Žbanić’s first film, Grbavica (2006, Grbavica – Esma’s secret), a drama about a mother who must reveal to her daughter that she is the fruit of a rape. Na putu (2010, The path) is dedicated to religious fanaticism, to the ghosts of war For those who can’t tell no tales (2013), followed by the comedy Love Island (2014), all directed by Žbanić. Another leading director is Aida Begić, who set her debut film Snijeg (2008, Neve) in a remote village where only women are left and in Djeca (2012, Happy New Year Sarajevo) it tells the story of a girl who she takes care of her brother in a cold and corrupt city; while the pioneer Vesna Ljubić returned to film making the remarkable documentary, between medicine and politics, Bosanska rapsodija na rubu znanosti (2011, Bosnian rhapsody at the margins of science).

Humor and attention to children are the characteristics of Srđan Vuletić’s films, Ljeto u zlatnoj dolini (2003, Summer in the valley of gold) and Teško je biti fin (2007, It’s hard to be kind).

Ahmed Imamović addressed the homosexual love between a Serbian soldier and a Bosnian in the comedy Go West (2005). To remember the moral tales of Antonio Nuić, such as Sve dzaba (2006, Tutto gratis), and the composed family dramas of Faruk Loncarević, Mama i tata (2006, Mamma e papa) and Sa mamom (2013, Con mamma). Finally, the episodic film signed by 13 European directors Ponts de Sarajevo (2014, also known as Bridges of Sarajevo) in the centenary of the attack on Francesco Ferdinando is interesting.