Buddhist art, term for the art shaped by Buddhism.

It does not form a stylistic unit, but developed certain forms of architecture and art that can be found in all countries in which Buddhism spread.

India: Buddhist art originated in India in the 3rd / 2nd centuries. Century BC BC and stayed there until Buddhism dried up in the 12th / 13th centuries. Defining the century. It is stylistically embedded in the respective regional and temporal currents of Indian art and, in terms of content, is divided into 1) the art of Hinayana, in which the typical Buddhist structures stupa, caityahalle and vihara emerged, 2) the art of Mahayana since 1st / 2nd Century, the human Buddha image (since then also in Hinayana), the Bodhisattvas and Tathagatas and 3) the art of tantric Vajrayana since about the 7th century with a multitude of magically rooted gods and their shaktis, teachers and esoteric Buddhas, the highest form of which was found in the representation of the primordial Buddha (Adibuddha). The most important testimonies of the first phase are the works in the places Bharhut and Sanchi as well as in the rock monasteries of Bhaja and Karla; the second phase was initiated by the art schools of Mathura, Gandhara and Andhra (Amaravati) and continued in Sarnath, the rock monasteries Ajanta and Elura as well as in Nalanda; Centers of tantric Buddhist art emerged under the paladynasty in Bihar (as in Nalanda) and in Bengal, as well as in Kashmir, from where the art influenced by Buddhism penetrated to Nepal and Tibet.

Indonesia: Java and Bali, Sumatra and Celebes (Sulawesi) in particular came into contact with Buddhist currents from India around the birth of Christ. The earliest artistic evidence includes stone sculptures and bronze statues. There is much to suggest that the figures were not imported, but made on the spot. Between the 8th and 13th centuries Java in particular existed under the influence of Mahayana, as the stone and bronze sculptures in the temples of Borobudur, Mendut, Pawon and Sari (around 750-900) attest. In the 13th century the art of Buddhism experienced a renewed bloom as an expression of the specifically Javanese syncretism between Tantric Shaivism and Vajrayana. B. the Candi Iago, but especially cult bronzes. Since the middle of the last millennium, Buddhist art has disappeared from Java.

Burma was already in the 3rd century BC. Buddhist evangelism, but the oldest surviving sculptures (presumably) date from the 9th century. The cult bronzes and stone sculptures, especially those depicting the Buddha, show stylistic influences from Gupta and Pala art, while the numerous pagodas are architectural, among other things. can be traced back to the Ceylonese stupas. Buddhist art flourished in Pagan (11th – 14th centuries), the capital of the First Burmese Empire.

According to lawfaqs.net, Buddhist bronzes, relief tiles and a few stone sculptures have been preserved from Thailand since the 4th century. The oldest, however, are imports from India, v. a. South India, which soon served as models for their own creations, whereby a characteristic style developed, especially in the art of Dvaravati (6th – 10th centuries). With the entry of the Thai into the history of the country in the 13th century, an almost unmanageable abundance of styles began to develop in Thai art. With a few exceptions, it is still the art of Hinayana, which produced sculptural works in bronze, terracotta and stone as well as paintings and in architecture stupas (Chedi) and monasteries (Vat).

Cambodia: In the Khmer empire, the powerful buildings Angkor Vat and Bayon in Angkor were built with floor plans in the style of mandalas.

China: The paintings, bronzes and sculptures of the grotto temples of Dunhuang, Maiji Shan, Yungang and Longmen, which were built between the 4th and 6th centuries, testify to the first flourishing of the Mahayana, which came to China via the Central Asian Silk Road Tang Dynasty are still strongly committed to their models, namely the Gandhara and Gupta arts. Because of the persecution of Buddhists between 841 and 846, no monumental works of bronze art have survived, but a large number of small bronzes, preferably created for private cult, attest to their heyday. A special form of Chinese Buddhist sculpture are the votive steles, which were created between the 6th and 9th centuries and are set up in temple halls and on graves and carry relief representations. Temples, pagodas) in China, as in the rest of East Asia, deviate strongly from Indian models, the representation of the Buddha and his accompanying figures in groups of statues, on scrolls and murals remains indebted to the Indian models. Above all, the cult of the Redeemer Buddha Amitabha with the Bodhisattva Avalokiteshvara assigned to him and the belief in a rebirth in the “Pure Land” gained great importance, which explains the popularity of the representation of the “Amitabha Paradise”. In the sign of according to tradition through Bodhidharma (5th century) founded Chan (Japanese Zen) Buddhism and the emphasis on meditation and independent attainment of enlightenment, independent of studying books and performing rites, and expressive monochrome painting emerged in the 13th century. Here the Buddha is represented as a person struggling for enlightenment (Liang Kai); The portrayal of the Arhat (Luohan), considered a spiritual model, and the patriarch and priest portrait (portrait) were also cultivated. With the suppression of Buddhism in the 14th century, the Buddhist art of China also lost its spiritual basis.

Korea and Japan: The early Buddhist art of Korea, the art of the three kingdoms Paekche, Koguryŏ and Alt-Silla (18 BC – 668 AD), is attested by some architectural monuments (pagodas), but above all by excellent bronze sculptures, especially the Buddha figures from Paekche show a characteristic style with soft flowing lines despite all the Chinese influence. The most important Buddhist temples from the time of the United Silla (668-935) are Bulguksa and the Seokguram cave temple (752) with 37 stone sculptures and reliefs. Through the mediation of Korean monks, Buddhism came from China to Japan in the middle of the 6th century, where, as the state religion, it had a decisive influence not only on Japanese intellectual history, but also on art and aesthetics. In the early stages of Japanese Buddhist art, continental influence is predominant. It was not until the Heian period (794–1185) that an independent style began to develop in architecture, sculpture and painting. The first Buddhist temples in Japan include, among others. the Shitennōji in Osaka (592) with the first pagoda of Japan, the Hōryūji near Nara (around 600) with the oldest surviving wooden buildings on earth and the Tōdaiji (738-61) in Nara with the Daibutsu (“great Buddha”). 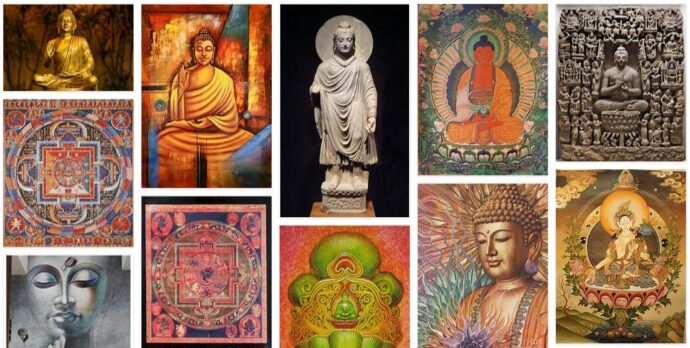