The Gambia. In January, the EU, which is Gambia’s largest donor, presented 17 reforms which it urged the Gambian government to implement. This included, among other things, not executing prisoners, but maintaining the moratorium on executions that previously applied. The Gambia received harsh criticism from the outside world in 2012 when nine executed people were executed. Other demands were to withdraw the harsh media laws that were introduced, open the independent radio stations and newspapers closed by the authorities, end with arbitrary arrests of journalists and human rights activists, and allow diplomats to visit prisons.

According to Countryaah, the EU requested a meeting with the Gambian government to discuss the issues, but its president Yahya Jammeh rejected the demands. He said that the EU was trying to create a puppet government in the Gambia, but that the country would not allow itself to be colonized by the EU once again. On January 12, thousands of Gambians participated in a demonstration against the EU and in support of Jammeh in the capital Banjul. In this situation, the EU interrupted the political dialogue with the Gambia, but resumed it in July. 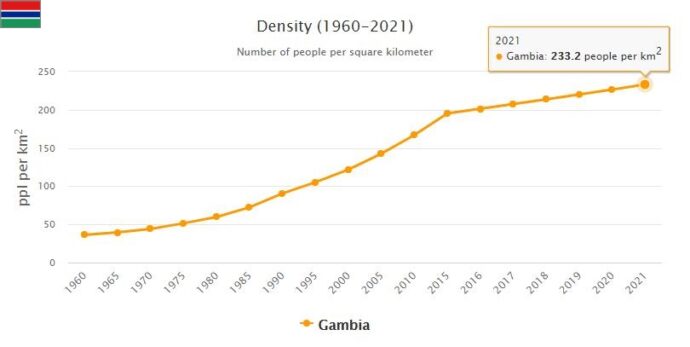 In February, Jammeh announced that all public servants would be free on Fridays to, as he said, be able to devote themselves to “prayer, social activities and agriculture”. On the Friday they will work on other weekdays. The leave also applies to schoolchildren, who should instead go to school on Saturdays. The majority of Gambia’s population is Muslims, but the most important prayer day of Muslims on Friday has not previously been unemployed as it is in most other Muslim countries.

Six of the country’s seven opposition parties boycotted the municipal elections in April. In addition to the ruling APRC (Alliance for Patriotic Reorientation and Reconstruction), some independent candidates and the opposition party NRP (National Reconciliation Party) participated, which told the media that by participating they wanted to fight political repression.

During the summer, Jammeh dismissed several of his ministers, including Justice Minister Lamin Jobarteh, who was also arrested on suspicion of corruption along with another government representative. Jammeh often re-furnishes in the government and handles important areas such as the Ministry of Defense and the Ministry of Religious Affairs.

Gambia West African state. It includes a small territory on the two banks of the Gambia river and is surrounded, except for a short stretch of oceanic coast, by Senegal, with which it shares the predominantly Islamic character, the composition of the population (main communities: wolof, mandingo, fula, jola, sarahule) and history up to the creation of a possession by the British, already active in the area since the 17th century, who in 1816 bought the island of Banjul from the king of Kombo, creating a settlement for freed slaves, bathurst, and extending its protection to the communities on the river, affected in the second half of the century by conflicts linked to a rapid process of Islamization: the leader religious Maba started the unification of the region, but was killed in 1864. The British attempts to give the Gambia to France, prevalent on the Senegalese coast, failed, in 1889 the two powers defined their respective borders. The British administration distinguished the colony in the strict sense – that is, bathurst – from the protectorate along the river, administered through local chiefs. The anti-colonial movement was dominated by the People’s progressive party (PPP) of Dawda Jawara, prime minister with independence within the Commonwealth (1965) and president with the proclamation of the Republic (1970). Repeatedly confirmed in office, Jawara foiled a coup in 1981military thanks to the intervention of Senegal, with which the Confederation of Senegambia (1982-1989) was then launched, but dissolved due to Gambia’s fears of being absorbed. Economic crisis and reduction of international aid hit the consensus for Jawara, who in 1994 was deposed and exiled by Captain Yahya AJJ Jammeh. Leaving the army, passing a new Constitution (1996), he was elected president (1997) and repeatedly reconfirmed (2001, 2007), despite reports of growing authoritarianism, abuse, rampant corruption and attempts at military coup.