Guatemala. On March 19, the long-awaited trial of Efraín Ríos Montt, accused of genocide and war crimes, began during his time as Guatemalan dictator in 1982–83. The Constitutional Court had already rejected Ríos Montt’s protests against the charges, which apply to the death of 1,700 Mayan Indians in fifteen massacres in the province of Quiché. However, the process encountered problems early on. Already after a month, the trial was adjourned for formal reasons by a judge who had previously made controversial judgments. Admittedly, on May 10, Ríos Montt was found guilty and sentenced to 80 years in prison – it was the first time ever that a former head of state was convicted of genocide – which was seen as a positive sign for Guatemala’s notoriously corrupt justice system. However, three days later the Constitutional Court declared the verdict invalid on technical grounds, which caused great upset.

According to Countryaah, the trial also cast a shadow over President Otto Pérez Molina, himself a military man who during the current years of the 1980s was an army officer in precisely the province of Quiché and was himself surrounded by suspicions of war crimes. However, he is protected by immunity as long as he is head of state, and he dismissed all charges as fabrications and warned against polarization of Guatemalan society. 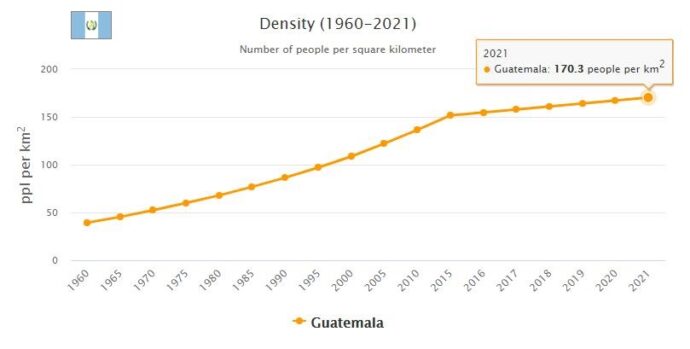 The doubts surrounding Guatemala’s handling of human rights issues were raised about the same time by the kidnapping of four Native American leaders in the southeastern province of Jalapa, who openly opposed the mining exploitation of a Canadian company in the area. One of the kidnapped was later found dead. Guatemala’s human rights organization UDEFEGUA registered 305 human rights violations in 2012. Similar conflicts between residents and mining companies took place in at least six different places during the year.

On May 24, former President Alfonso Portillo (2000–04) was extradited to the United States, where he is charged with money laundering for a sum of $ 70 million. The extradition had been delayed by the court for two years.

Gross national product (GNP, per resident and year): 4060 US$

State and form of government
Constitution of 1986
Presidential Republic
Parliament: National Congress (Congreso Nacional) with 158 members, election every 4 years
Direct election of the head of state every 4 years (no re-election)
Suffrage from 18 years of age

Unemployment (in% of all labor force): no information

Demography and economic geography. – Guatemala is a state of Central America, located in the isthmus. The country of Guatemala (15.859.714 residents, according to an estimate by UNDESA, United Nations Department of Economic and Social Affairs, of 2014) is characterized by an extremely depressed socio-economic condition: the literacy rate (75.9%) is among the lowest in Central American countries, the percentage of child labor is among the highest, income inequalities they are strong and over half of the population lives below the poverty line. The economy was affected by the drop in the prices of agricultural products (coffee and cardamom), as the primary sector still contributes 13.5% to the formation of GDP and employs 30% of the active population. Consistent remittances from emigrants.