Niger. In 2013, Niger was the last of all 186 countries in the UN Index on Human Development. According to Countryaah, the country’s birth rates were among the highest in the world, but the life expectancy of the residents was only 55 years.

However, during the year, a report from Save the Children showed that Niger made the greatest progress of all in reducing child mortality. Despite scarce resources and the country 321 Nigeria suffered from recurring drought and famine, child mortality in Niger fell by almost two-thirds between 1990 and 2012. 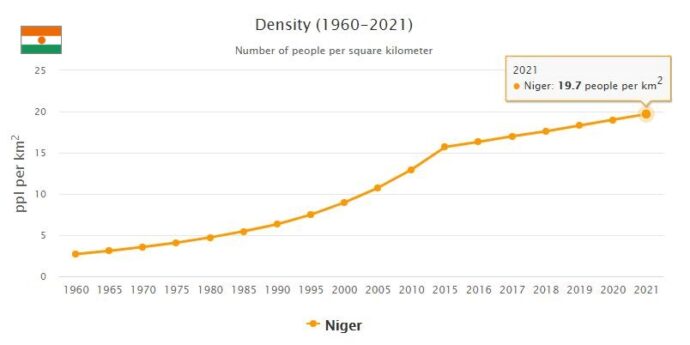 Drought, grasshopper swarms, uncertain food prices and political instability have given the country a chronic food shortage, and the government worked on a plan for change during the year. The main goal is to transform agriculture, which provides livelihood to 80% of the population. The intention is to use resources from the country’s uranium and oil exports to finance the agricultural sector.

In 2013, an increased share of the resources was used by the military by sending close to 700 soldiers to the West African so-called Stabilization Force that entered Mali to help the government there to fight Islamist rebels.

As a result, Niger was also attacked by rebels, who came across the border from Mali. In May, suicide bombers attacked a military base and a French-owned uranium mine in northwestern Niger. A total of at least 25 people were killed, with the attackers, and about 50 people injured. French nuclear power company Areva was forced to stop production in the mine for a while. Areva’s two mines in Niger provide fuel to one-third of France’s major nuclear program and thus contribute to some of the cheapest electricity in the western world.

Later in the year, the government decided to review the contract with Areva and demanded sharply increased government revenue from the mines. Thousands of people demonstrated in the mining town of Arlit against French Areva in support of the government’s investigation. The locals criticized Areva for taking so little advantage of the mining industry. they complained of water shortages while the company pumps up many millions of cubic meters of water each year.

The conflict in neighboring Mali meant that Niger had to receive a large number of refugees. In some refugee camps, the United Nations World Food Fund WFP introduced a system of food vouchers instead of rations. Thus, the refugees were able to vary their diet by choosing what they wanted to buy in local stores, and local trade gained a boost. According to WFP, the system provided a supplement of over SEK 700,000 a month to the economy of the small town of Mangaize near the Mali border.

The International Court of The Hague decided during the year an old border dispute between Niger and Burkina Faso. Both countries declared themselves satisfied with the decision of the court, which made some border adjustments.

In October, 92 people were found thirsty in the Agadez area of ​​the Niger Desert after their vehicles collapsed on a major migrant route to Europe. The victims were mostly young families and most were women and children. Agadez lies several hundred kilometers from the neighboring countries in the north with only sand and soothing heat in between. According to the UN, about 80,000 migrants travel through the Sahara desert in Niger each year.

After the tragedy, Niger decided to close the illegal migrant camps in the north. The government believed that the tragedy was the result of the trafficking of human traffickers and it was declared that those involved in trafficking would be severely punished. Many arrests were made, reportedly also among personnel from the security forces.

In November, the United Nations stated that Niger had close to 40,000 refugees who crossed the border from Nigeria in the south from the fighting there between the military and Islamist militia Boko Haram.