One of the three subcontinents of America, the region is known for its diverse geography and for being formed, mainly, by Latin countries.

South America is the name given to the southern region of the American continent. Classified by Abbreviationfinder as a sub-continent, it comprises 12 countries and two territories: French Guiana and the Malvinas Islands.

With an area of 17,832,000 km², which corresponds to an eighth of the Earth’s surface, South America is bathed, in the north and northwest, by the Caribbean Sea; to the northeast, east and southeast, by the Atlantic Ocean; and to the west, by the Pacific Ocean. In addition to Antarctica, the subcontinent is the southernmost territory on Earth.

As it surpasses sub-Antarctic latitudes to the south and, to the north, beyond the zone of Ecuador, South America has an enormous climatic and vegetation diversity. In the region, it is possible to find everything from tropical forests, with the Amazon as the greatest example, to desert areas, such as the Atacama desert, in Chile. In the southern tip of the subcontinent, of mountainous relief, the climate is cold and rainy almost all year round.

Culturally, South America is still part of Latin America, a region that encompasses countries that speak Romance languages – in this case, Portuguese, Spanish and French – and that, in their majority, were colonized by Spain, Portugal or France. In the subcontinent, several indigenous languages are also spoken, such as Guarani and Quechua. 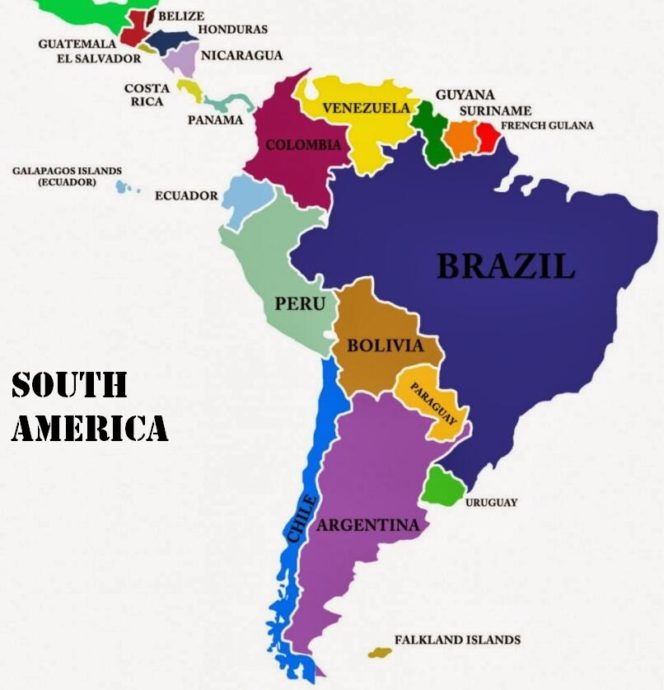 Get to know the main data, countries and capitals of South America:

The climate is the main factor in determining the plant formation of a portion of the globe. The South America has a vast territory and latitudinal orientation (south to north), plus a rugged and, for these reasons, has varied climates. Therefore, different plant formations originate throughout the South American territory.

It is important to realize that the vegetation is not static and that there are transition areas between different vegetations.

Vegetable formations with a tropical climate are found in northern South America, mainly in low-lying areas. The vegetation of the tropical savanna is found in northern and central Venezuela, the coast of Ecuador, the central west and part of northeastern Brazil, in small enclaves surrounded by the Amazon rainforest in northern Brazil. This vegetation is characterized by a formation of fields covered by grasses with small trees and shrubs spaced in the landscape. The rainforest can be found in northern Brazil, southern Venezuela, southern, central and northern Colombia and central Bolivia, forming the Amazon rainforest, in addition to the southeastern and southern coast of Brazil, constituting the Atlantic forest. It forms ombrophilous forests (extremely dense), with broad leaves (broadleaf), needs a lot of moisture and does not lose the leaves (perennial). The crowns form a canopy, which allows only 1% of the soil’s sunlight, and is divided into three niches: the upper, 50 to 60 meters, the medium, more dense and with trees between 20 and 40 meters, and the lower, from five to 15 meters. The seasonal forest and shrub complexes is a varied vegetation that occurs at the southern edge of the Amazon rainforest, western Brazil and Bolivia, Paraguay and northern Argentina, and in the northeastern semiarid, in Brazil. Having a climate with two seasons, one dry and the other rainy, this vegetation has spaced trees, with the umbrella-shaped tops facing upwards, in some locations, and xerophytic trees, adapted to the drought, in others. The landscape changes depending on the season and examples are: the caatinga,

The vegetations of mesothermal climates appear in the south of Brazil, northeast of Argentina and in the central and southern portion of Chile. The fields are present in southern Brazil and northern Argentina, presenting only low grasses and broadleaved trees that appear on the riverbed. The middle – latitude, mixed ombrophilous forest is found in the southern plateau of Brazil (araucaria forest), in southern Chile, and at medium altitudes in the tropical Andes. It is made up of both acyclic trees, with needle-shaped leaves, and broadleaf trees. The dominance is due to the temperature of the place: the lower ones favor the aciculifoliates, while the higher temperatures favor the latifoliates. The central portion of Chile is dominated by Mediterranean vegetation, where we can see shrubs with deep roots and twisted branches, as well as small well-spaced trees.

Dry climate vegetation is found in Argentine Patagonia, northern Chile and the coast of Peru. The vegetation of hot deserts in northern Patagonia, Argentina, northern Chile, and Peru’s coastline, ranges from almost none to xerophytic shrubs, adapted to the dry climate, and cacti. The south of the Argentine Patagonia has a cold desert vegetation, where we find small shrubs and vegetation formed by lichens and mosses, as well as short grasses. The alpine tundra dominates the entire Andean chain, and is made up of small herbs, mosses and stunted shrubs. 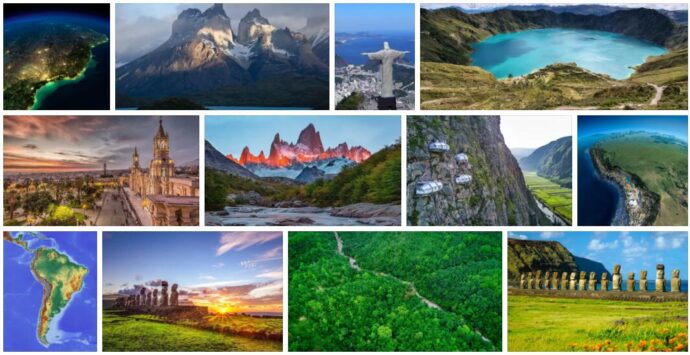