Uruguay. The most talked about event in both Uruguay and internationally during the year was congressional approval in August of a law that legalizes the cultivation and sale of cannabis and puts everything under state control. Consumption was already legal. The government argued that the law was primarily a health policy measure intended to help rather than punish drug addicts.

According to Countryaah, Uruguay had already, as the first Latin American country, banned tobacco smoking in public places. While a majority of the people’s opinion in the country was opposed to the law change, it was viewed with interest by other countries’ governments in Latin America, who have problems with crime linked to drugs. 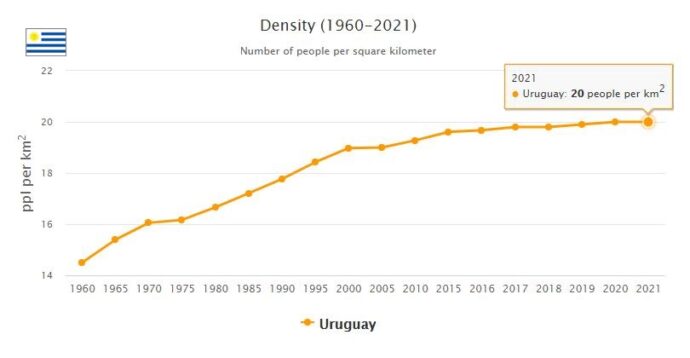 In early October, President José Mujica announced that the finely owned UPM-Kymmene company would be allowed to increase its pulp production at its plant on the Uruguay River. The announcement came shortly after Mujica’s visit to neighboring Argentina, where the protests against the pulp mill have been loud for a long period of years.

Argentina’s Foreign Minister Héctor Timerman accused Uruguay of acting unilaterally and against current agreements. The case will therefore, on Argentina’s initiative, be reported again to the International Court of Justice in The Hague, where it has been open for negotiation several times before.

In February 2011, Uruguay supported the establishment of UNASUR and was itself included in Latin American cooperation.

In March, Uruguay became the 7th Latin American country to recognize Palestine as a state.

In June 2012, Uruguay legalized state cannabis sales, while Mujica urged the rest of the world’s states to do the same. The purpose was to weaken the drug cartels, get a better overview of the users and be better able to use preventive measures to combat abuse. In December, same-sex marriage was legalized. The proposal had been fiercely opposed by the deeply conservative Catholic Church.

In September 2013, Mujica gave a landmark speech at the UN General Assembly dedicated to humanism and globalization. In his speech, he called on the international community to step up efforts to preserve the planet for future generations. At the same time, he drew attention to the power of financial capital and the consequences of its crises for ordinary people. He called for a purer and simpler way of life based on human relationships, love, friendship, adventure, solidarity and family, rather than life subject to the tyranny of market and capital.

In 2013, The Economist named Uruguay the “Country of the Year”. In the continent, it is in first place in terms of democracy, peace, absence of corruption, quality of life, freedom of the press, extent of interlayer, prosperity, security and e-Government. Per capita, it is the country in the world that contributes the most troops to the UN peacekeeping missions.

The October/November 2014 presidential election was won by former President Tabaré Vázquez. The constitution does not allow the re-election of a sitting president who would otherwise have secured the popular Pepe Mujica re-election. Except Mujica would rather be a pensioner. Already in the first round, Frente Amplio got candidate Tabaré 49.5% of the vote, while his main counterpart, the conservative Alberto Lacalle had to settle for 32%. In the second round, Tabaré gained 56.6%. He was elected president in March 2015. The turnout was 90.5% and thus twice as high as the turnout in the US presidential election. In the first round, parliamentary elections were also held, giving Frente Amplio 50 out of the 99 seats of the Chamber of Deputies and 15 out of the Senate’s 30. Of the 15 seats of the FA, 6 went to the left in the Movimiento de Participacion Popular (MPP).

In June 2015, the government announced that it would continue its program of receiving refugees from the war in Syria. By 2014, the country had welcomed 5 Syrian refugees.

In October, the country was elected a member of the UN Security Council in 2016-17. 50 years after it had last held a seat on the Council.