Namibia. This year’s rainy season was the driest in 30 years and led to major problems for residents, especially in the northernmost parts of the country where most feed on livestock and agriculture, making them particularly vulnerable to periods of drought as livestock run the risk of dying while accessing to basic foods that millet and corn drastically decrease. In May, the country’s president, Hifikepunye Pohamba, declared disaster status as a result of the drought.

Although Namibia is classified as a middle-income country by, among others, the World Bank, many Namibians live in poverty. According to Countryaah, the income disparities in Namibia are among the largest in the world. The stable economic growth that the country has shown over the last ten years has not benefited the majority of the population. 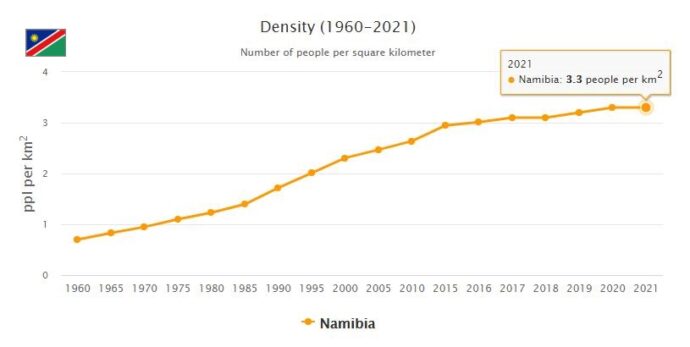 In August, to discuss issues relating to water supply and climate change, the country’s capital Windhoek was named the ninth international water conference organized by the International Water Association (IWA) in August. Although long-term access to clean water has been neglected in a number of countries in Africa, it was the first time the conference took place on the African continent.

The water shortage in Namibia is largely due to climate change, which results in extreme weather conditions for many sub-Saharan countries. Another reason for the water shortage is the increased migration into the cities and a water-demanding mining industry that uses large quantities of water in its production.

To overcome these problems, a lot of resources are being invested in research on water supply, and Windhoek is considered to be a precursor when it comes to developing waste water purification techniques for clean drinking water. In 2012, researchers found a large underground water source in the northern part of Namibia on the border with Angola. Assessors believed it could provide the Namibians with clean water for 400 years. See 3rjewelry.com for Namibia travel guide.

In the fall, work began on replacing German place names, a remnant from the colonial era of the 19th century, to Namibian counterparts. Another positive news during the year was that Namibia ranked high on Reporters Without Borders list of press freedom in the countries of the world. The country climbed two places compared to the previous year and was ranked number 19 out of a total of 179 countries. Namibia was thus the country in Africa that ranked highest on the list, followed by Cape Verde and Ghana in 25th and 30th respectively.

The political life of Namibia continued in the early years of the 21st century. to be dominated by the South West Africa People’s Organization (SWAPO), the socialist-inspired party that had led the armed struggle against the Republic of South Africa in the long conflict that ended with the proclamation of independence in March 1990. Since then, the SWAPO, also thanks to a shrewd policy of non-opposition towards large foreign economic groups and the white population present in the country, had won all the elections, taking its votes from 57 % of the first consultations to 76 % of the last. held in 2004. The party based its strength both on the symbolic element that identified it with independence and on its ability to ensure stability, managing to compose the interests of different ethnic groups and guaranteeing, on the whole, the exercise of freedom of opinion, despite control of the press and other media. This sort of one-party democracy based on a broad consensus and on regular electoral consultations and with a high participation in the vote (in 2004, 84.5 % of those entitled) had progressively eroded the opposition, also due to the inability to the latter to propose programmatic alternatives.

After the 1999 elections, the government concentrated its efforts on implementing land reform. The more equitable distribution of land since independence constituted a crucial problem: even in 2001 the 52 % of the arable land, corresponding to almost all the profitable lands, was concentrated in just 4,000 farms largely owned by the white population and the government had taken possession of just 6 % of the territories it had deemed necessary to distribute to poor peasants. Failure to solve this problem had led, among other things, to growth in urbanization and unemployment.

In November 2001 S. Nujoma, president of the Republic since 1990, re-elected in 1994 and, thanks to a constitutional change, again in 1999, announced his intention not to reapply for his fourth term, deciding in any case to remain at the helm of SWAPO. The presidential elections held in November 2004 were won with 76.3 % of the votes by H. Pohamba, historical leader of SWAPO and several times minister for agrarian reform, a personal friend of the former president. The simultaneous legislative elections confirmed once again the clear supremacy of SWAPO, which won 55 seats out of 72, while the main opposition party, the Congress of Democrats (CD), won just 5 seats. The new government identified the agrarian reform as a qualifying element of its program, manifesting its intention, already from its first acts, of wanting to continue with greater decision the program of agreed expropriations which between 2001 and 2004 had led to the purchase of 700 farms.